Oh dear, I had intended to keep this blog up & do lots of work this year in the garden, but again I didn't do either.

The experiment with the floating fibre stuff in the pond didn't work at all. Nothing grew so I sowed some more lettuce & waited for it to grow before transplanting them, but they just died.

The sweet potatoes took off well & I was left with so many slips I had nowhere to put them. I tried offering them on Freecycle but even then they didn't get taken & I had to throw them in the end. I haven't harvested the ones I ended up keeping, they are in pots & I'm wondering if I can over winter some as I know they haven't had enough time to get big enough.

Normal potatoes did well, still have some in the ground although the tops have now been cut back.

Tomatoes did reasonably well but the plum type still haven't all ripened, they seem to take a lot longer to grow than the normal round cherry type.

Then the lawn mower decided to die on me today. Now it's only a few weeks out of it's warranty, I'm absolutely disgusted that it's done this. Looking at it properly I discovered that the air intake is underneath & has no cover. Hence the fact that when I finally took the cover off to take a look, this is what I found.

As far as I'm concerned this is a major flaw in the design. If I had known this was filling up I would have opened it long ago, however that would have invalidated the warranty.

So that's just a warning to anyone out there with a Qualcast lawn mower. Now I have to go & buy another mower. I tried it after cleaning & there were sparks coming from the motor so I don't think it's going to be useable.

Not a happy bunny.

On the other hand I have been up to quite a bit this year. Instead of gardening I have been trying to set up a business. I have named it after my nana, Lilian.  It's called Lilians Treasures and I can be found on FaceBook, Pinterest, Instagram, e-bay and Etsy.

I am making quilted picture ( I call Quiltures). I hand paint on fabric & then quilt them. I then frame in a box frame with either a single or double mount. I have made a few & sold some. I have also made some Christmas items, hopefully these will sell at the Christmas Fair I will be attending in Eynsford, Kent.

Do take a look at my new business, I can do almost any picture & they do make lovely unique gifts. I also intend to add some other handmade items throughout the year.

These are a few of the commissioned pieces I have done so far. 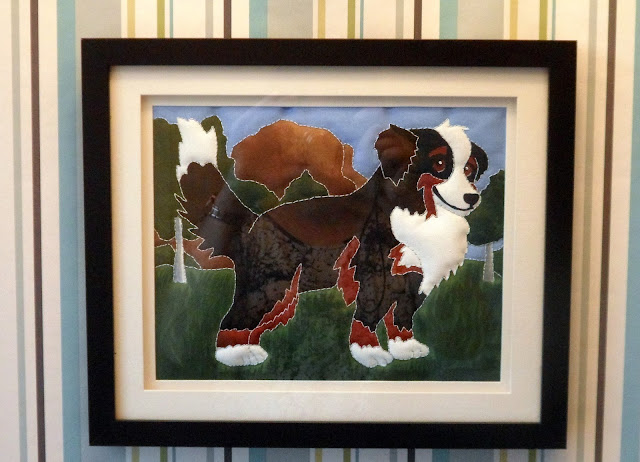 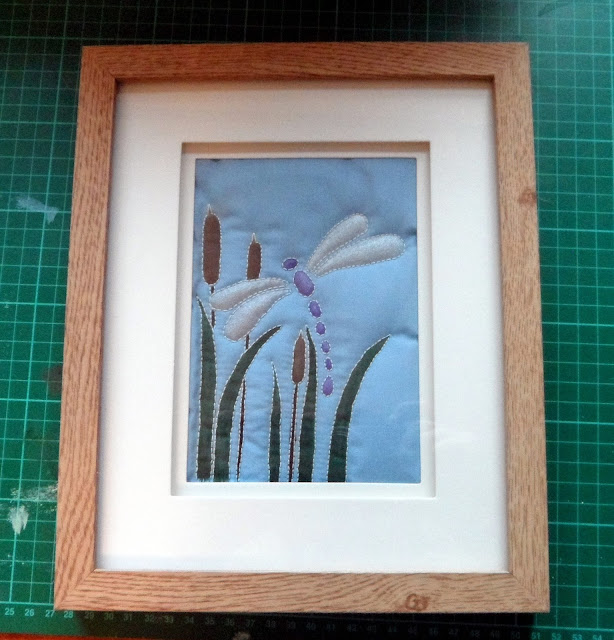 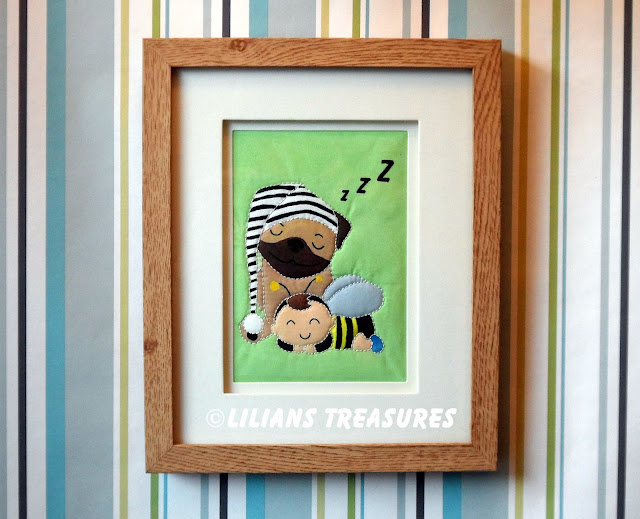 I think the pug & beeboy are the best, just so cute.  I have added a page on this blog with all the ones I have done, some already sold but I can always do another (except with the commissioned pieces as they are personal to the purchaser). I am always happy to make more if anyone would like one. (you can't blame a person for trying).


Posted by Liz at 22:42 3 comments:
Email ThisBlogThis!Share to TwitterShare to FacebookShare to Pinterest

The sweet potato tuber is in soil, I keep this warm & wet to let the slips grow. I then pick them off & put them in water to grow roots before potting then up, if they already have some roots then I pot them up straight away. Keeping them warm & moist seems to work, before when I've just kept them in water indoors I've not had any success.


Both apple trees are in bloom this year, normally they alternate.

Wow, I've been really bad with this blog. But then not a lot has been going on in the garden during the winter. It's now spring & I've been working away at it.

First off I've started some of my own sweet potato slips, they are doing really well. 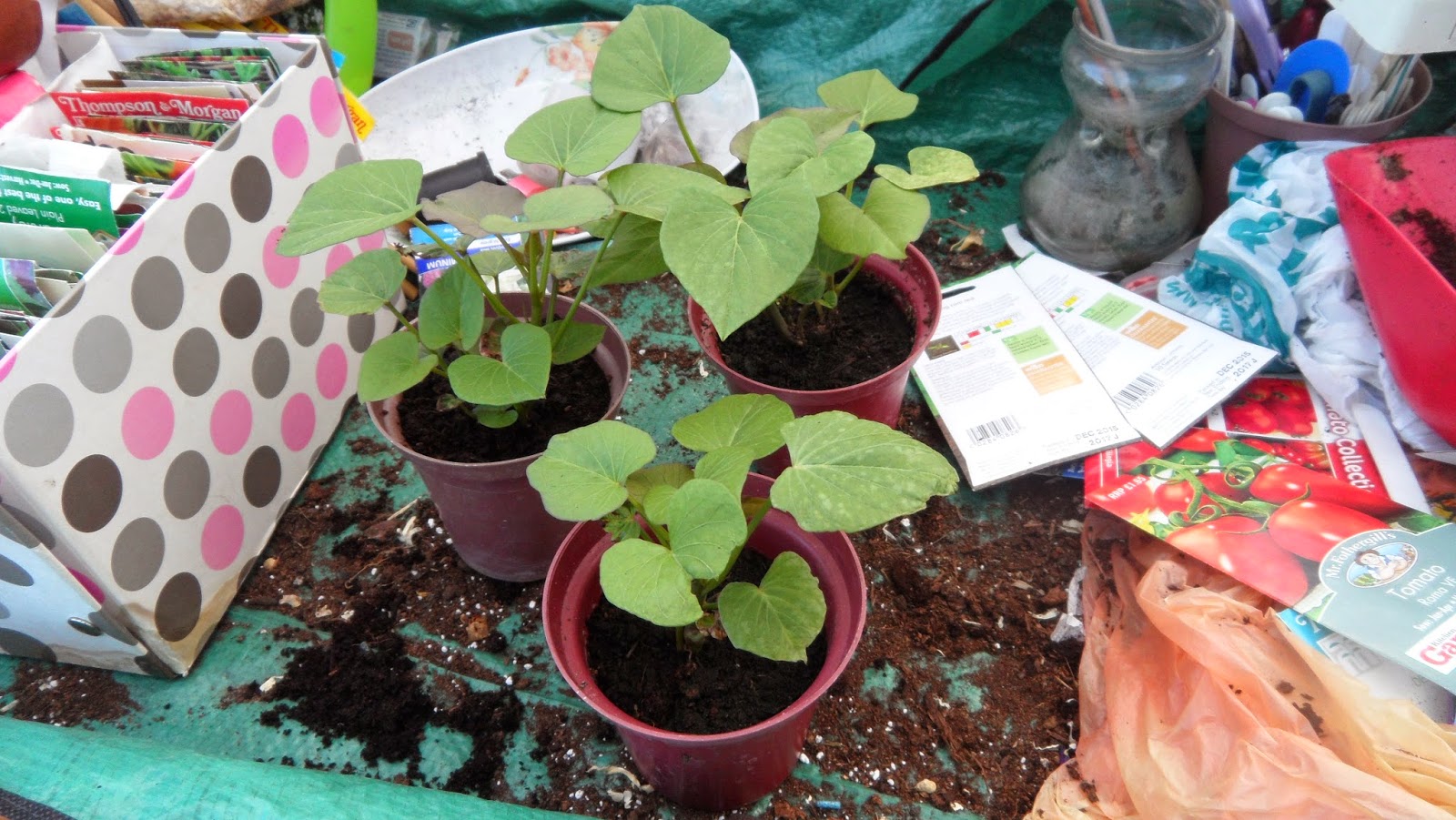 I've never had much success starting my own slips but this year I tried a different tactic, instead of putting them in water I put them in some compost which I kept wet & in the heated propagator. These are the 3 biggest, the roots are already starting to come out of the bottom of the pots. There are more to come. I thought I'd taken a photo of the potato itself but I can't seem to find it so will try & remember to take another so you can see.

So this is my first experiment of this year & it seems to be a success so far. My second experiment is going to be hydroponics, well on the smallest scale possible.

I have a pond in the garden, now with only 3 fish (they all seem to die on me) & it's always been dead space, pretty but not useful. So I have invested in some rockwool & made myself a floating garden.

The rockwool came as a 1 metre slab, I chose it like this so I could cut it to size, much easier than buying the pre-cut pellets. I wanted to cut them to fit the polystyrene planters that you get free from stores like B&Q when you buy plants (I have loads). This was very easy, just use a sharp knife. I found that the bit I cut off filled 2.5 cells, I just added the 2 halves to make a whole.

Cutting them to fit & slotting them into the cells. They fit really well as you can squash them if necessary or cut a little bit more off.

Once I had filled the cells it was time to get the seeds in. I've put 2 seeds in each cell, these are lettuce & I want to use it as a bigger version of cut & come again, the pond is so close to the back door I should be able to just nip outside & get clean lettuce. I filled 2 of the polystyrene planter with lettuce & the third with watercress. I've grown watercress before in the pond but the fish ate more if it then I managed to pick. I am hoping they won't eat all the roots & kill the plants, that's of course if they grow in the first place.

Forgot the important part, I didn't even think about whether rockwool expanded or not, I can safely say it doesn't. So cut to the size you want & don't worry. The wool holds enough water to keep these polystyrene planters just low enough to keep it all wet but still high enough for it all to float, so far so good.

If they grow ok then I may invest in some special pots & a sheet of polystyrene to make it better but for now this is the cheapest way to try it out. I don't know if I could do the fish part though, growing fish for food. I know I couldn't eat these, they are comets, I may have to take a look & see what fish are edible & can stand cold temps through the winter.

Now my potatoes are growing well, they were started in the greenhouse in a large pot, I have been earthing them up & they are now outside. I think all chances of frost are now gone this far south.

I have also planted out my sweetcorn today. I've been hardening them off for the last few weeks & planted them out today. I'm more worried about something digging them up then frost. Something's tried to dig my other potatoes up. I've had problems with cats pooping in the garden too. I have noticed that they prefer my veg beds when they are dry so I have made sure to water them even though they are empty at the moment.

Runner beans have been started & some are up already. Cucumber, pumpkins & squash have been sowed into the heated propagator. A few tomatoes have germinated but don't seem to be doing very well. I need to sow some plum types for cooking.


Both the carrots & parsnips are up & growing. I've put the wire over the top to keep cats out & to stop my dogs eating any of them before they get to grow.

During the winter I didn't get to do much gardening, we were unlucky that we didn't get any snow (my dogs love snow) but it was wet & cold & uninviting. I spent the time indoors being very bored but I did learn how to make soap, I was hoping I could sell some of it but there are so many rules & regulations so unfortunately I can't. It's a shame the government don't help small business or allow rules to be waivered for small scale sale, I mean you can't even bake a cake & then sell it to your neighbour, you have to give it away.  They could always allow you to sell with no rules up to a certain turnover or something, like less than £10k. Never mind, the rules are there to protect buyers. We can blame Europe for all the silly H&S rules.

Hopefully I will remember to keep up with the blog this year, report on my experiments & let you know if they are worth the time & effort.