Wow. I said I was going to make some tomato puree (or paste if you are from USA) and didn't really expect it to go right but it did.

I found a recipe on How to, it had a few references along with it & links to other ways to cook the same thing so I got a bit confused over how much to use. One said 5 lbs of tomatoes and half teaspoon of salt and another said 5 tomatoes to half teaspoon of salt, not sure which one was correct but it is a big difference. In the end I had just under 4 lbs of tomatoes to use, I took off the stalks, washed & quartered them. I put about a tablespoon of olive oil in the bottom of the pan, heated and added the tomatoes and salt. The recipe said cook for 5 minutes but I cooked it for about 20.

I then put the mix into a blender as I didn't know what a food mill was so I knew I didn't have one. This chopped it all up lovely. I then passed it through a sieve to remove the seeds and skin. The recipe then said to put it into a shallow dish in the oven on a low heat for about 2 hours.


Well by now it was late at night and I wanted to go to bed. The sauce still hadn't reduced down and I didn't want to leave the cooker on all night, especially with the dogs. So brainwave time. I got out my slow cooker (electric crock pot in USA), poured the mixture into it & set it on high. I left the lid ajar so the steam could escape. When I came down in the morning 6 hours later I had perfect tomato puree. 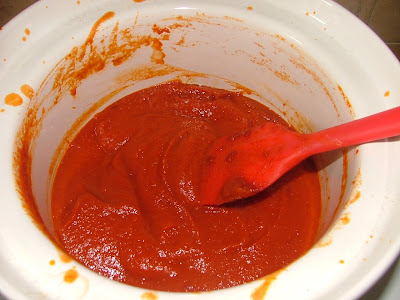 There isn't much of it, amazing to see how much actually goes into that tin I normally buy.
Now some people might say this is a waste of good tomatoes, I've never liked them but I do like lasagne & bolognese as well as ketchup. I buy a lot of puree so to me it isn't a waste, in fact this will be the first time ever I will be eating my own grown tomatoes.

Now all I have to do is figure out a way to make that cucumber relish come out as I want it to.

Here's the link to the recipe I used. http://www.ehow.com/how_8485322_make-tomato-paste-diced-tomatoes.html
Posted by Liz at 16:58
Email ThisBlogThis!Share to TwitterShare to FacebookShare to Pinterest