I can't believe it's April already, where has it gone. The weather so far has been pretty appalling, we had snow in March. At least the sun came out for a couple of days, so off to the plot.

I had managed to finish digging over the end bit of the plot, very slowly due to not wanting to hurt my knees again. So I took my chitted potatoes down to get them in. Luckily this year the mice didn't eat them, I put some poison down in the greenhouse this year. A friend from FB has just had her dog die, the vet said it was poisoning probably due to eating a dead mouse killed by rat/mouse poison, so that's it, no more poison going down ever. I had put mine where the dogs couldn't get it but hadn't thought of them eating a dead mouse. So next year I will have to find another way of keeping the mice out.

I planted 4 rows of potatoes and have space for another one. I dig a spade depth and put some manure into it, then some chicken pellets and a magic ingredient. Now to see if the magic works. Last year I had a good crop, although I didn't record any of it. This year I will make notes of what I get out of the plot. 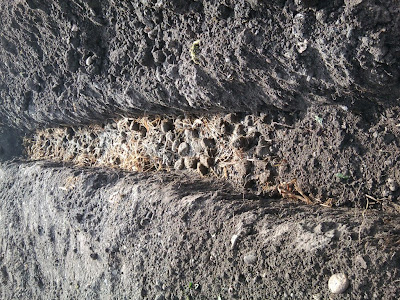 I covered the fertilizers with a layer of soil before putting the potatoes in, then covered them over. I will be able to earth up a bit later but usually cover with grass clippings. 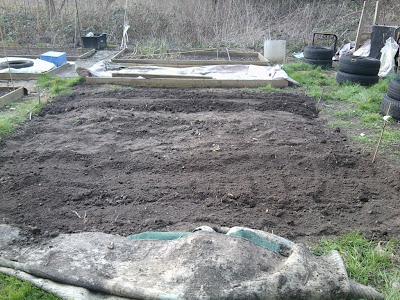 I have started filling the tyres (to the right﻿) with soil, manure & compost, I will be planting Sweet Potatoes in these. This will be my first ever. I love Sweet Potatoes and hope they grow well, I have heard they are difficult.

The runner bean wigwam is up & ready, 2 beds are all ready. The other beds just need a rake over to remove the surface weeds  stones. Now all I have to do is wait for my seeds to come up. I bought myself 2 new heated propagators, large ones. They are twice the size of my old ones, in Homebase they are selling them at £39.90.  Good job I found 2 in Wilkinsons at half price, yes I paid £14.95 each (original price £29.90- cheaper than Homebase to start with). It pays to look around. I still need to get a shed and now I need to get rid of my 2 old, small propagators.

I sowed 2 rows of carrots & 2 rows of parsnips. Still need to start the beetroot rows. I have lots of pots, still waiting for them to start to grow. My chillies are up, in the heater. My tomatoes had come up but died off so I've had to sow more. I found 2 packs of onions I didn't know I had so I popped them into some modules to give them a start. The garlic hasn't shown an appearance, don't think it will now so may have to buy more.

The last 2 days weather wise have been lovely, today it's raining. So I think more work in the greenhouse.

Posted by Liz at 13:23
Email ThisBlogThis!Share to TwitterShare to FacebookShare to Pinterest