Where did it all go

Well I can't believe it's already half way through September. It's flown by. I have been popping down to the plot but keep forgetting to take photos and updating the blog. I did remember to take photos of my harvest today but forgot to take them of the stuff I took to mum's. She had a bag of Desiree potatoes, loads of tomatoes and some courgettes which were more like marrows (dad loves marrow). I picked one of my pumpkins as the plant had died, it is nearly ripe so I have put it in the greenhouse to harden off. 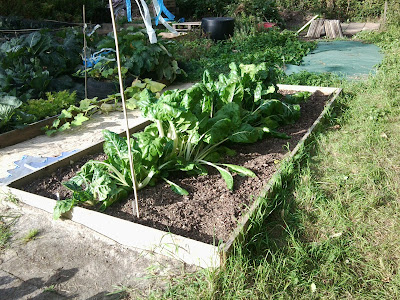 I picked all the beans I could, some had been hiding from me so they had got quite large. I don't like them when they get big as they get hard and don't taste as nice as the baby ones. I let Dale eat the big ones as he never complains, he loves runner beans. I hoed around them too. 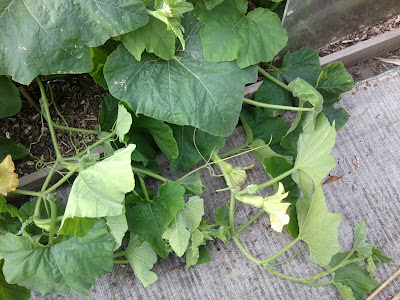 Now even though I put net and a barrier in place the badgers have been back and had the last of my sweetcorn. So to date we have managed to only get two very small cobs. I'm not sure if it is badgers, I found another shrew (alive this time) and wonder if it is this that is eating them. The Butternut Squash are getting very big and there are lots of little squashes on the plants. I'm hoping there is enough good weather to get them a bit bigger. I pulled up the remains of the sweetcorn so there is plenty of room there for them. I got hold of a load more horse manure so have dumped that on one of the beds and will sort it out later. There is still a lot to dig over and I will do this if we get a good spell in the winter. I cut a lot back and have piled this up and will burn it when it gets a bit drier. 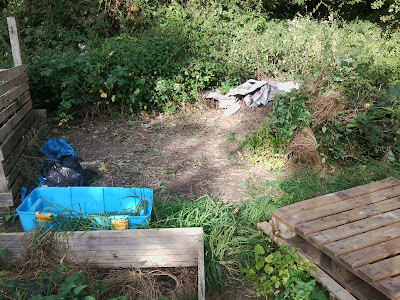 Now I have to also finish off the patio ready to get a shed. I will also have to think about what I can do for some fencing to keep all these pests off my plot.

So this is my harvest for today, the last two pea pods, some overgrown zucchini, lots of beans and some calabrese. 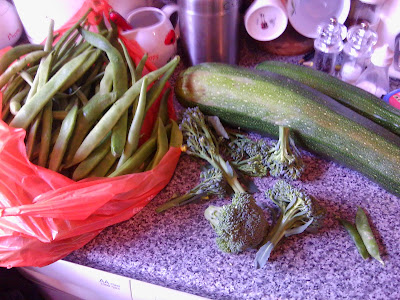 Posted by Liz at 17:38
Email ThisBlogThis!Share to TwitterShare to FacebookShare to Pinterest