No, not I'm a bad blogger, blogger is bad. I've been forced over to the new look and I don't like it. It's messed everything up and now I've lost all my favourite blogs I follow. I have to re-enter all the sites now and there are some who's addresses I can't remember, at least I have some of them listed on the main page so those I can do, but there are others I follow that I didn't put down because they weren't about gardening. Oh well.

I got down the plot yesterday and finally met the man who's plot is next to mine. He hasn't done much to it but he is old and uses a stick so it must be difficult for him. Mind you my knees still hurt and I can't kneel down still so have been sitting on an upturned box to weed.

I raided the neighbour's (at home) skip for rubble and laid the patio. It's not too bad. It still doesn't look exactly flat but I did use a spirit level. There looks to me like there is a bump at one point.  I also grabbed the pallet that was there and put that at the front of the compost bay. I don't know if I will get down there today as I am very stiff and my knees are really hurting today. I think I can be forgiven. 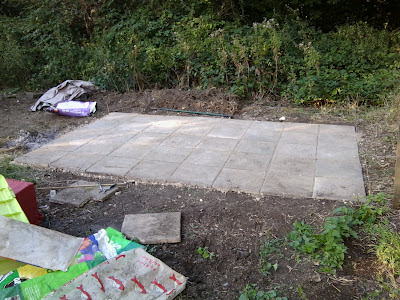 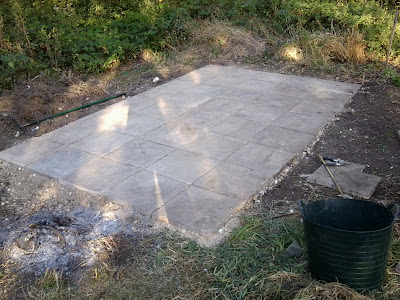 One of the other plot holders from further down came and had a chat to me. He was telling me that the people who run the site (on behalf of the council) want the guy who has the first plot to leave as they don't like him putting down cardboard, odd, they haven't moaned at me with the carpet and he seems a nice person, he keeps it going unlike some of the others. There are a lot of untended plots, maybe they aught to put their energy into making the owners tend them or give them up and finding new people to take them over.
Posted by Liz at 13:02
Email ThisBlogThis!Share to TwitterShare to FacebookShare to Pinterest