Well that and Red Cherry, tomatoes that is. I planted both this year as I couldn't remember which one had been the best. Well Gardener's Delight was certainly the best. I also looks like there may be some blight on the Red Cherry, so I will not be growing them again, although the tomatoes themselves were lovely and red and small. The Gardener's Delight has lots of nice shaped and tasty tomatoes, they are growing better and no blight. 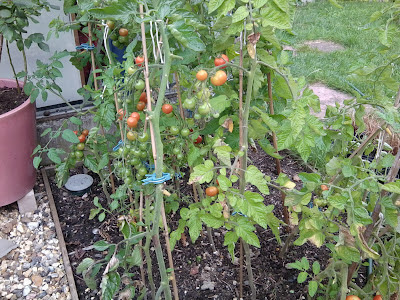 We still need more sun to ripen the green tomatoes but they are turning. Rain is forecast over the next week but hopefully we will have some sunshine too. 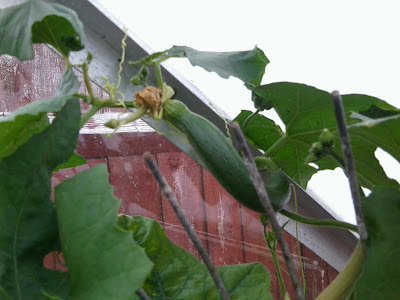 I also tried growing some Loofahs, the plants are not very tall and there are quite a few fruits (?) on them but they seem to have stopped swelling and are turning yellow, except for this bendy one. I don't think it has been hot enough for them although I did keep them in the greenhouse. May be next year I will plant the cucumbers in there, they haven't done well at all this year. It's odd as I always grown mine outdoors even though they are a greenhouse type, they usually do very well. I think it just proves the weather has been all wrong this year. 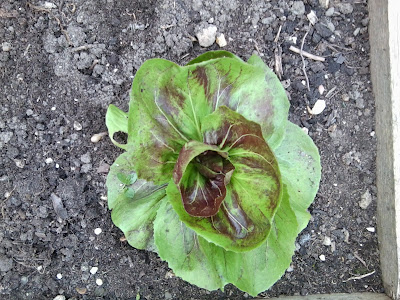 Now I think this is Radicchio. I planted a load of seeds but the snails & slugs have had most of them, well all but this one. It's greener than I thought it would be, maybe they get redder with age. Of course it may not be what I think it is, I will have to wait and see. 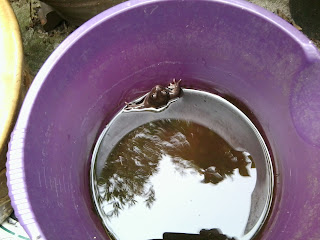 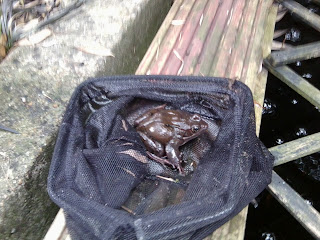 I had to rescue this little cheeky chappy. I knew he was in the garden, whilst sitting on my back door step I could hear him/her croaking and couldn't figure out where it was. Well today I found it, trapped in the bucket. It's now back near the pond. 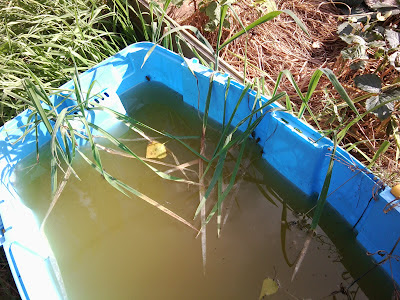 Down on the plot, the bees have found a nice watering hole, you can just about see them along the water line. There was lots of rubbish left from the last owners and the boxes have come in rather handy. One I have used to sit on so my knees don't get painful but I had just left this one to the side and as it has rained it has filled up. It isn't very deep but the bees have started using it to drink from. I think I will have to do something about turning it into a little pond. They are attracted to the blue colour so it is ideal for this use. I will have to put rocks in it so other animals don't get trapped.

I'm not sure how much I will be able to do down there over the next week but I would really like to crack on with the patio area. There are a couple of skips on the way home with some rubble in, I might raid them for foundations although the few I laid directly on the soil seem quite steady.
Posted by Liz at 19:20 4 comments:
Email ThisBlogThis!Share to TwitterShare to FacebookShare to Pinterest

Well things have a way of running off and leaving you behind. I have been so busy with work, doing overtime thanks to my NOT wonderful work mates leaving, having babies and holidays and bunion operations. That has left 3 of us to work 101 hours between us. Now I am only supposed to do 12 hrs a week (contracted) and have been doing double this. Doesn't sound a lot but I am only part-time. So It has been 8 hr shifts for all of us, no breaks and on our own. I work in a pharmacy (in Sainsbury's) and it is busy, it's not all about giving out prescriptions, there are the long conversations about ingrown toenails and babies that haven't pooped for 4 days. So I am knackered, my knees are killing me and I haven't posted for a while, so sorry.

I have been able to get down the plot to pick veg (not a lot of it) and watering. Picked a lot of beans yesterday (chopped & frozen already) also dug up some potatoes (desiree) for mum. The courgettes have gone mental (I really don't want this many so next year it's 1 plant only) and I have finally got a few peas. There is still only 1 carrot and a few beetroot but my pride and joy were the sweetcorn, were being the word, the badgers have eaten most of them and I think the mice have had some too.

Having said all that, I do have 2 pumpkins growing and I think I have a butternut squash (thought it was a pumpkin but the fruit is the wrong shape) but I don't think it is going to get big enough before autumn sets in and I don't know if it will ripen.

﻿ The celery seems to be doing well, although again I'm not sure if this is growing too late.

Most of my veg & fruit in my garden has finished, just waiting for the apples. I will try and take some photos of the garden soon. The tomatoes are now getting lovely and red, have picked quite a few of them. I chose 2 varieties this year as I couldn't remember which ones had done well from last year. It was definitely Gardeners Delight.

Any way I'm off for the week now and it's raining, so won't be able to get down the plot.

Oh, nearly forgot, we got shoved off the plot yesterday, there had been a sewage spill in our little river and the council had to pump it out, so lets hope that's all sorted.

﻿
Posted by Liz at 17:02 3 comments:
Email ThisBlogThis!Share to TwitterShare to FacebookShare to Pinterest

The good news first. I picked up the paving slabs today and took them straight down the plot. I think I've told you that the person on the plot before mine hadn't been looking after it and had thrown his weeds on the path between the plots making a huge bump, anyway I usually just drive over the bump (carefully) in my CR-V but today I totally forgot that the car was lower (a lot lower) with the paving slabs in. Well I grounded out, lol. So instead of driving them all the way, I had to park up and carry them. Dale gave me a hand (faint) and between us we had it all done in an hour (pick up too).

I have laid some down just to see what it will look like and for size and placement. 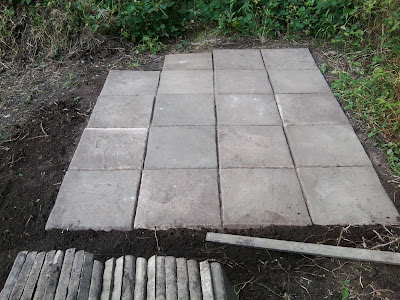 I need to take my spirit level with me to make sure it's level, it looks like it slopes. 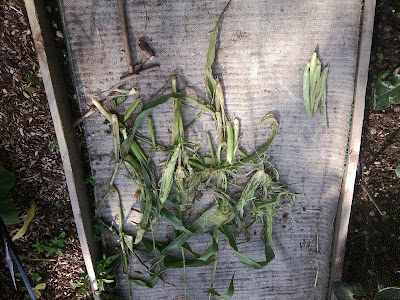 Well whatever it was that broke some of my sweetcorn has been back and eaten the large cobs that were almost ripe. Bastard! (sorry). So I have put netting all around them. It had also eaten all of Roger's carrots (and my only one). We think it may be badgers but I suppose it could be rabbits.

I hope everything is going well for everyone else.
Posted by Liz at 23:32 2 comments:
Email ThisBlogThis!Share to TwitterShare to FacebookShare to Pinterest

I spent yesterday and today picking up bricks that I got free from Freecycle. I am going to use them to make a patio at home. It took four trips in total to pick them all up, now I'm knackered. It didn't help that I trapped a nerve in my back, that to go with the bad knees I already have. Never mind, I will have a long soak in the tub that should make me feel a bit better.

I managed to pop down to the plot, mainly to check everything was OK, and to pick anything that was ready. The zucchini had grown to marrow proportions, oh well! So here's how it looks today.


I also found a poor dead little Shrew. I didn't realise they were so small. It was only about 2 inches long. 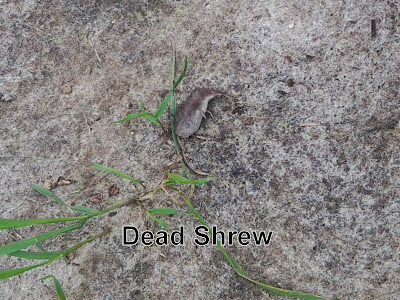 I have managed to get some paving slabs free too. I will be collecting them later in the week and will use them as a base for my shed (when I finally manage to get one).
Posted by Liz at 21:22 4 comments:
Email ThisBlogThis!Share to TwitterShare to FacebookShare to Pinterest 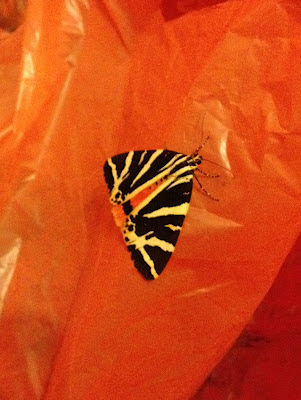 We had a little visitor last night. We found him sitting on a plastic bag in the bucket of spuds. It is a Jersey Tiger Moth and usually live in Europe, they are now being found in the UK and have been sighted in the south of England. This is the first time I have ever seen one. It is supposed to be a daytime moth, I let is go outside last night so I do hope it's ok. I don't think moths live very long.
Posted by Liz at 15:33 4 comments:
Email ThisBlogThis!Share to TwitterShare to FacebookShare to Pinterest
Newer Posts Older Posts Home
Subscribe to: Posts (Atom)