Phew! What a hot week it has been so far. I have a little bit of shade on the plot from the tall trees that run along side it so I have moved my bench to this spot. I still haven't managed to dig any more of the plot over because my knees are still playing me up, I have an appointment with the doc for Friday.

I did manage to get my sweetcorn planted and I have added a couple of Butternut Squashes at the ends so they can grow in and around the bottom of the sweetcorn bed. 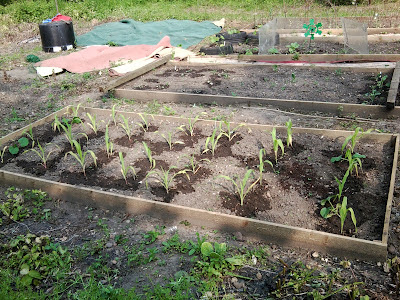 I also managed to pick up some old carpet from a friend who has just replaced hers, you can see it in the top left corner above. I will cut this down and use it in the pathways between the beds, but for the moment I have laid it out across the part I still need to dig over. This should help keep the weeds down, and they are growing like crazy. It's a shame my plants aren't growing as well as the weeds are. 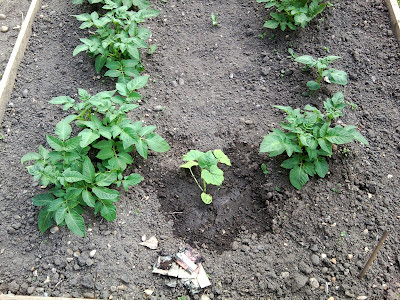 My potatoes are coming up, although there are a few gaps where I know I planted some but they haven't come up. I'm not sure if I should leave it and give them a chance or replace them. I also planted a pumpkin that can grow down the middle of the bed in between the potatoes. I have also planted some in the bean bed so they can grown underneath them. Make use of the space I say, they should help keep the weeds down too. 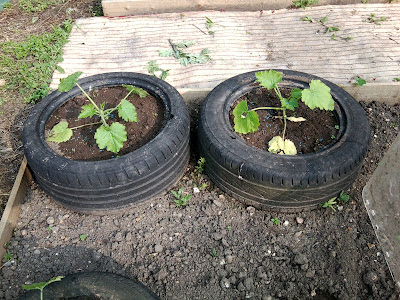 I also planted my Zucchinis. I'm using the tyres that were left on the plot to raise them off the ground to keep them well drained. As I had 4 of them the final one has been planted straight into the bed, we will wait and see which method is better.

Not a single carrot or beetroot has come up. I planted the seeds back at the end of March (I think) but still nothing. I think the rain must have rotted the seeds. So today I tried a different method. I made my drill, watered it then used the tapes I bought yesterday. Yes tape. Seeds on a tape by Suttons. I had to laugh though, you would think they would have machines that could spread the seeds out properly so there would be no need for thinning out, this would be especially good for the carrots, but no, I will still need to do some thinning if they all germinate. I haven't labelled each row separately as I know I have alternated the rows to confuse the carrot fly and I will know when they come up what is what. There was no point in taking any photos of this bed, however, I didn't think if any of you might have wanted to see the seed tape, oh well, sorry.

My peas aren't doing very well, they look a bit sickly. I have just sown some more in my greenhouse, lets hope they grow quickly and strong so I can replace some of the sickly ones. I have lots of seedlings that need to go down the plot but they still need some time to get a bit bigger, fingers crossed.

Just as I was leaving a young lad with his friends parents came up to me. He is thinking of getting a plot. I hope they give him one that has been recently vacated, not that I don't want him down with me it's just that it would be a lot of hard work for him and I don't know if he will be up to it. He has lots of big ideas and I think the reality may be a shock to him.
Posted by Liz at 16:50 4 comments:
Email ThisBlogThis!Share to TwitterShare to FacebookShare to Pinterest

I keep forgetting to tell you all but there are spare plots down here in Dartford, Kent. If any of you know anyone that would be interested in a plot let me know. Some of them aren't too bad but there is lots of space that also needs reclaiming to the point where only half of the site is in use. We could use some goats down here to get rid of all the bramble and nettles so if any one wishes to loan us some......
Posted by Liz at 17:23 No comments:
Email ThisBlogThis!Share to TwitterShare to FacebookShare to Pinterest

I didn't update the blog on Friday but I did spend some time down at the plot. The weeds are growing but not a lot else. Some more potatoes have come up and I did put my beans in. I took some cabbages and broccoli down and planted them out but I didn't label them all individually and totally forgot which were which. I will find out when they start to get bigger. 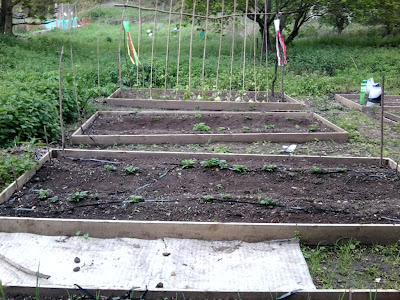 I bought a push mower and mowed the bit of grass in front of my plot but the rest was too long and really needs strimming first. I am not going to buy a petrol one of those, too expensive, especially as I have an electric one for use at home. 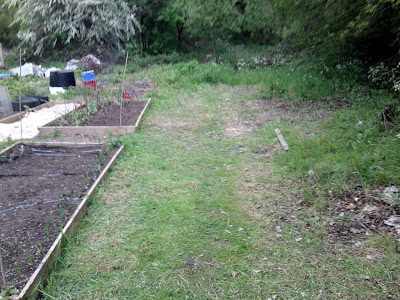 I took a wander around the site and found that someone has put beehives in the woods. I knew there was someone who was going to do this but thought it was going to be on one of the plots not hiding in the woods. I don't mind bees at all, now wasps are another matter. I don't like wasps, when I was little my brother pushed me into a wasp nest and I got stung all over. 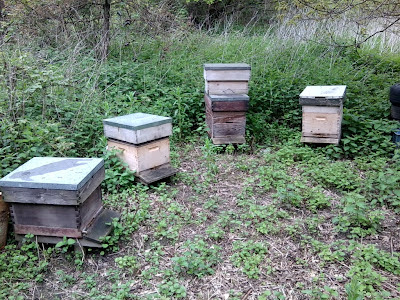 I managed a small bonfire to get rid of some of the rubbish and did a bit of digging, it's very hard going with all the roots from the brambles and nettles. Then just as I was leaving the Goodyear blimp flew overhead. 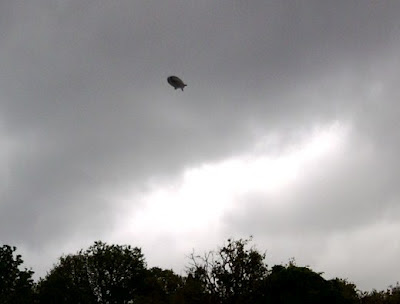 Posted by Liz at 17:19 No comments:
Email ThisBlogThis!Share to TwitterShare to FacebookShare to Pinterest

I spent today emptying out my two compost bins. One was "cooking" all of last year, the other one I filled all of last year. I emptied out the first one, sieving it and bagging it. Then I put the top of the newer one into the first bin and started sieving the good compost at the bottom. I didn't manage to finish it all, have left about a quarter to do tomorrow when I get home from work.

I got four bags of lovely sieved compost and there is more to come but I have run out of bags. The larger lumps of compost I put straight on the garden, the worms will sort that out and anything that hadn't rotted enough I have put back into the heap to carry on rotting through this year.

Sorry about the fuzziness on the photo, I didn't realise until I downloaded it and my batteries have run out so I couldn't take another.
It's going to be funny tonight when the fox turns up, he uses the heap to jump the fence. I can just imagine the look on his face when he realises his jumping pad has gone.
﻿
Posted by Liz at 19:46 1 comment:
Email ThisBlogThis!Share to TwitterShare to FacebookShare to Pinterest

Managed to get down to the plot for a couple of hours today. I took advantage of a break in the clouds and a little ray of sun, jumped in the car and headed to the plot with the intention of getting as much digging done as possible. Alas the weather decided to change back to the dull, cloud cover and rain, good bye little ray of sun.

Well the weeds have certainly loved this weather, they are growing at an alarming rate. I had to get my hand shears out and chop the grass and nettles back so that I could get to the plot itself. The track in to the allotments is so muddy my car (a CR-V) had trouble keeping on it, it kept sliding and is now filthy, ok more filthy than it was before.

The wind has blown over my cloches so I took them off my peas. I cut some branches off some of the dead trees on the site to use as sticks for them to grow up. I have never grown these peas before so I'm not sure how tall they are going to be, the pack says 30in, so they should be tall enough (the twigs that is). I hope it discourages the birds from pulling them up. They haven't touched my onions so I am hopeful. I really want to get my beans in soon, I hope the weather improves soon. I may plant them out tomorrow and cover them with fleece, just in case we get a frost. I wouldn't normally worry about it at this time of the year but the weather has not been normal.

I managed to pick up a bench from freecycle so took that down there. All I need now is a shed and a push mower.


I only managed a small amount of digging, the clouds decided I had had enough time there and let all their rain out. It started very lightly but now it's pouring down outside.﻿ The weather report for Sunday is dry, just my luck as I'm working. Monday says rain again. Typical.
﻿I don't like having to go to work, they keep giving me extra work to do and extra hours. I have 5 Sundays in a row to do and I don't even work on Sundays. There is supposed to be two of us covering maternity leave, so doing alternate Sundays between us, but for some reason this month I seem to be doing all of them. I still have to wait till the end of June before I get time off. I have looked for another job but there aren't any around at the moment. I will keep looking though, perhaps something to do with plants this time. There are two nurseries that have closed down near me, I would love to open one of them but just don't have the money to do it.
Posted by Liz at 16:54 2 comments:
Email ThisBlogThis!Share to TwitterShare to FacebookShare to Pinterest

What awful weather we have been having, I do hope it gets better soon. I have just read on another blog that we are getting frost this weekend. Oh dear, I have just taken my peas down to the plot and planted them out. I have put a cloche over them so I hope this will do. The weeds have run riot down there. Nettles and thistle are the worst at the moment but it looks like the brambles are starting to get going. The grass has grown on the pathways and made for very wet walking.

I took a look around at other people's plots, Mr talk-a-lot has a few potatoes coming up, beating mine. Some people have their peas in already and there are plenty of cabbages going to seed. A lot of the plots are looking the worse for wear. Some haven't been touched at all this year. There are only a few that have been dug over. Not good.

I have two potato shoots coming up, one in the bed of reds and the other is white. It's still too cold to plant out my beans. The onions are doing well, nothing has pulled them up yet. The temperature said it was 10oC but it felt much colder than that.
﻿﻿﻿ ﻿ ﻿ ﻿﻿﻿ ﻿