Well it's day 17 working on the plot. When I look at what I've done in 17 days I'm quite proud, I have done a lot. I know I got the plot back in January but as I work I can't get down there every day and of course we had some bad weather in February so couldn't get down there then. March was lovely weather and I was able to really crack on but then I got some top soil which has taken a lot of time to shift down to the plot. But that is finally done and now I can get back to digging. I ache all over after today, I shifted the last of the top soil and started to dig over the last bed in the row, but, I was very hard going as there were so many roots in it. This is the bit where the brambles were growing the most and some of these roots are massive. You can't really see in the photo below just how bad they are but it gives you an idea. 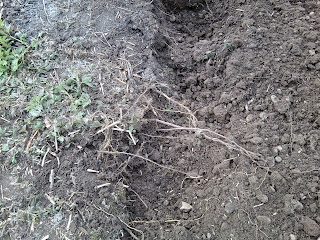 ﻿
It's looking good though and now as all the top soil is moved I can get on with digging over the rest. I could have had it all done by now if it hadn't been for that top soil, won't be taking any more again, although it has filled up the top bed in the first row that was a bit low. So this is how the second row is looking now. 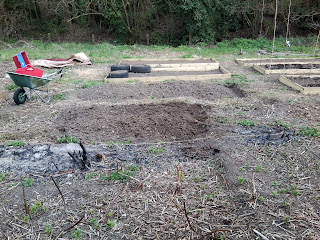 I didn't quite finish digging over the top bed, was far to knackered by then so I have left a little bit for next time. Hopefully I can get down on Sunday, if not it will be Monday. 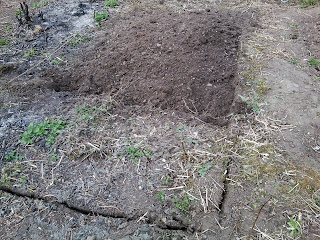 ﻿
I will be popping down to Hawley Garden Centre on Sunday, they have their grand re-opening, by invitation only. I like Hawley as it's not one of those big chains, although they don't always have a large selection they will get plants in for you. They also have a big selection of Acers and Rhododendrons, which I love. And they never sell anything to other people when you have ordered it, unlike the market stall I go to. I was there on Thursday and saw a lovely red & white Camellia, it had been sold but the man said he had another one down the front so I followed him to buy it. When he got there another customer came up and asked for it so he sold it to her. I wasn't happy, he said that there were 2 other camellias there, I looked and told him they were white so not the same. I don't suppose he cares so long as he gets a sale but Hawley isn't like that. They are very good to their customers.
I hope you all have a nice Easter weekend.
Posted by Liz at 20:07
Email ThisBlogThis!Share to TwitterShare to FacebookShare to Pinterest