I have spent the last three days at the plot shifting top soil. A local builder offered it to me and it is good quality out of a local garden. He was building a patio so most of it is turf, which will rot down in the new composter I have half built. I am currently sorting out the turf (compost heap) sieving the soil (to go on beds) and then the remaining stones are going between the beds filling the holes in the paths. So nothing else has been done to the plot, no more beds dug over, only the compost heap has been sorted. So far no-one has offered any help. Well except for Mr talk-a-lot who offered to take the stones for his path, mmm! Now if I'm sieving it and moving it all I think I will keep the stones for my own paths especially as there are lots of holes and dips in it where I haven't dug these over. There weren't as many stones in it as you would think so I've filled in the biggest holes first, if there are any more then I will spread them about a bit more. So sorry but there are no new photos to show you of digging but I have got one of the compost bin I made, that will give you a laugh for the day. I need more wood, I used what was dumped on the plot to make it with, there were a few fence posts so I used them for the uprights and the planks for the sides, I will need to buy more to finish off the sides. I also found a tarpaulin sheet which I have placed under it so the weeds don't grow through. 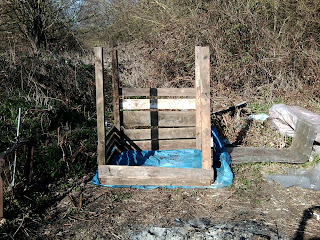 As I left the allotments on Tuesday a lady had broken down right across the entrance so I couldn't get out. I asked if she had someone coming to help her and she said she had called AA. At this point a man came running down the road with his dog (out jogging) and suggested we move her back a bit so she was safely off the road and I could get out. So he tied his dog up to the post and we started pushing her car back. The dog was whining at being left and all of a sudden the "Wife" came running down screaming "where's the dog". OMG the look on her face, she thought the woman had run the dog over and we were trying to get the car off of it. I felt so bad. I know how I'd feel if that happened to Fizz. She was a bit too far behind to have seen what was actually going. Luckily the dog was fine, the wife was fine, the driver was fine and the man was fine. All was fine.

Now today, I eventually managed to get petrol. They were out of unleaded last night as everyone has been panic buying, so I tried again today, they had some and a lovely long queue too. I hope you are all ok and have managed to get some without having to pay extra for it as I know some places have put their prices up deliberately. Not fair.

In the greenhouse I have had no more mice problems. My seeds are all coming up so I have sowed some more so they will be a few weeks behind, hopefully plant them a few weeks after the others and that should extend the crop a bit.
Posted by Liz at 19:48
Email ThisBlogThis!Share to TwitterShare to FacebookShare to Pinterest